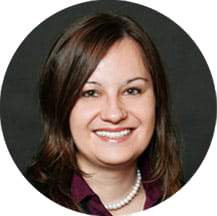 Aggie Dolinska is the Managing Attorney at the Riverside Office of Wilner & O’Reilly. She is Board Certified as a specialist in immigration and nationality law by the State Bar of California’s Bureau of Legal Specialization. Ms. Dolinska’s immigration practice involves all areas of Immigration and Nationality Law, including family and employment-based immigration, non-immigrant visas, removal defense, litigation, and asylum law. Ms. Dolinska is currently the head of the litigation and deportation department in our office. Her removal defense practice includes representing clients in proceedings before the Immigration Court and on appeal with the Board of Immigration Appeals and the Court of Appeals for the Ninth Circuit.

Ms. Dolinska graduated magna cum laude from Boise State University in 1998 with a Bachelor of Arts degree in Criminal Justice Administration and minor emphasis on drug and alcohol studies. She earned her Juris Doctor degree in 2001 from Brigham Young University, where she was a senior editor of the BYU Education and Law Journal and a member of the International Moot Court and American Inn of Court No. 1. While in law school, Ms. Dolinska worked as a legal intern for the Ada County Prosecuting Attorney’s Office in Boise, Idaho, and completed a summer externship with Judge Daniel T. Eismann of the Idaho Fourth District Court in Boise. Ms. Dolinska also participated in the Woody Deem Trial Advocacy Competition and Jessup International Moot Court Competition. Prior to her practice in immigration law, Ms. Dolinska practiced civil ligation in Utah.

As a native of Poland, Ms. Dolinska has had personal experiences with the immigration system in the United States. Because of those experiences, she offers a unique perspective and understanding to the clients of Wilner & O’Reilly. Ms. Dolinska is fluent in English and Polish.