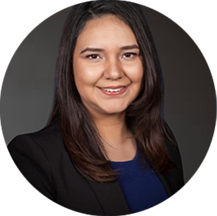 As a former officer with USCIS’ Los Angeles Asylum Office, she gained invaluable practical experience and substantive knowledge. As an officer, Ms. Murillo-Quintana adjudicated asylum, credible and reasonable fear applications. She was among a few officers chosen to adjudicate follow-to-join refugee applications. Her prior experience with unaccompanied children as well as her Spanish language skills allowed her to be detailed as a virtual case manager with the Office of Refugee Resettlement to the Southern Border where she was able to reunify over a hundred children with their family members in the United States. She was also trained at the Federal Law Enforcement Training Center (FLETC) in Glynco, Georgia.

In her free time, Ms. Murillo-Quintana enjoys hiking with her spouse and her two Siberian huskies.