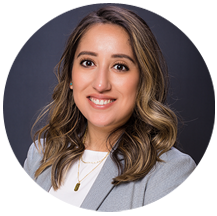 Angie D. Ayala is an Associate Attorney in the family-based department of Wilner & O’Reilly, APLC’s Orange office. Ms. Ayala is admitted to the California Bar and the Central District of California. She received her Bachelor of Arts in Political Science from the University of California, Irvine and her Juris Doctorate from Chapman University, Dale E. Fowler School of Law.

During her time in law school, Ms. Ayala was a law clerk for the immigration department of the Public Law Center of Orange County, a pro bono law firm that provides access to the legal system to lower-income residents of Orange County. At the Public Law Center, Ms. Ayala handled family-based, asylum, u-visa, and other immigrfation matter for lower-income clients. She also worked at the Bette and Wylie Aitken Family Protection Clinic, where she served as a Student Attorney for the immigration department and handled u-visas, more specifically, dealing with women who were victims of domestic violence seeking assistance.

Prior to law school, Ms. Ayala was a legal assistant for 4 years where she initially became exposed and managed her own case files involving family based petitions, citizenship, DACA, and participated in the USCIS interviews as a sworn interpreter.

Before joining Wilner & O’Reilly, Ms. Ayala was an associate attorney at a civil litigation firm where she gained and expanded her research, analytical and writing skills. She became exposed to writing demand letters, complaints, discovery motions and making court appearances. Ms. Ayala also gained experience in writing appellate briefs, which she intends to use all of her civil litigation experience into the immigration arena.

Away from the office, you can find Angie spending time with her family, running, reading, and exploring new cities.