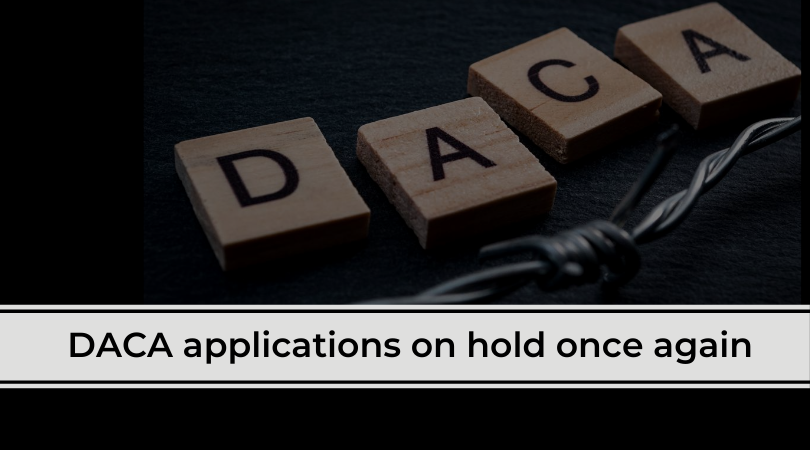 On June 18, 2020, the Supreme Court reinstated DACA, settling the issue of whether the Department of Homeland Security (DHS) failed to comply with the Administrative Procedure Act when it abruptly ended the program in 2017. With the revival of DACA, people rushed to submit new applications in anticipation that DHS may revoke it again.

Unfortunately, the reinstatement (for filing new applications for first time recipients) lasted only a short period of time. Acting Secretary of Homeland Security, Chad Wolf, issued a memorandum on July 28, 2020, placing DACA on hold, allowing himself time to decide whether to maintain, rescind, or modify DACA. He did not provide a time frame for when a final decision will be rendered.

Many are left wondering what this means for DACA in the interim? During the small window of time that DACA was reinstated USCIS received numerous new applications. And even though the Supreme Court reinstated the program, USCIS still rejected many of those applications while others remained pending leaving applicants to question what would happen with those applications. The memorandum answered that question, instructing USCIS on how to handle DACA and any associated applications. DHS made the following changes to DACA, effective immediately:

The current changes to DACA are very similar to what has already been in place since the time DHS first tried to rescind the program in 2017. The most significant change is the renewal period changing from once every two years to once every year. Fortunately, current DACA recipients will not be drastically affected and will continue to benefit under the program. For those who submitted new applications between June 18, 2020, to July 28, 2020, you should expect to receive the rejected package back in the mail.

Just as DHS’s first attempt to rescind DACA resulted in litigation, it is highly likely this will find its way back into the courtroom once again. While it is not disputed that DHS has the power to rescind the program, doing so would come with major pushback. There are around 700,000 DACA recipients so ending it would have a drastic negative outcome not only on the recipients themselves but also the people and businesses they associate with in the U.S., adding to the challenge of terminating DACA.

If you or a family member have DACA and have questions about what is happening, now is the best time to contact an immigration lawyer. Wilner and O’Reilly’s lawyers have years of experience dedicated to immigration law. We have former immigration officials and specialists certified by the immigration board, so we offer extensive experience and knowledge to help you with the most complicated immigration cases.

At Wilner & O’Reilly, APLC, we offer free in-person consultations at our offices in Orange, Fresno, Riverside, Sacramento, San Bruno, and San Diego, California, as well as in Orem and Salt Lake City, Utah, and Boise, Idaho.

Derek Poulsen is the managing attorney of Wilner & O’Reilly, APLC San Diego Office Location. He focuses his practice 100% on Immigration Law. He graduated from Utah State University where he earned his Bachelor of Arts degree in Sociology with a Minor in Spanish. He earned his Juris Doctor degree from Creighton University School of Law. During law school, he was selected to be on Creighton’s National Trial Team and earned the Honorable Lyle E. Strom Trial Advocacy Award. His previous practice included criminal defense, where he gained valuable knowledge of the negative immigration consequences that differing criminal activity has on an individual’s ability to remain in the United States.

Richard M. Wilner is a founding member of Wilner & O’Reilly, APLC, and is Board Certified by the State Bar of California as a Specialist in Immigration and Nationality Law. He is admitted to practice law in the State of California and before the U.S. District Courts for the Central, Northern and Southern Districts of California, the Northern District of Texas, the U.S. Court of Appeals for the Ninth Circuit and the U.S. Supreme Court.Mr. Wilner has received the coveted Martindale-Hubbell AV Rating, the highest legal and ethical rating that one can receive from one’s peers in the legal community. Similarly, he has been awarded the title of Super Lawyer from 2007 to the present. He is best known for his work in advising Fortune 500 companies, middle and small market businesses, entrepreneurs and foreign nationals of extraordinary ability in athletics, arts, and sciences in the complex area of U.S. Immigration and Nationality Law.