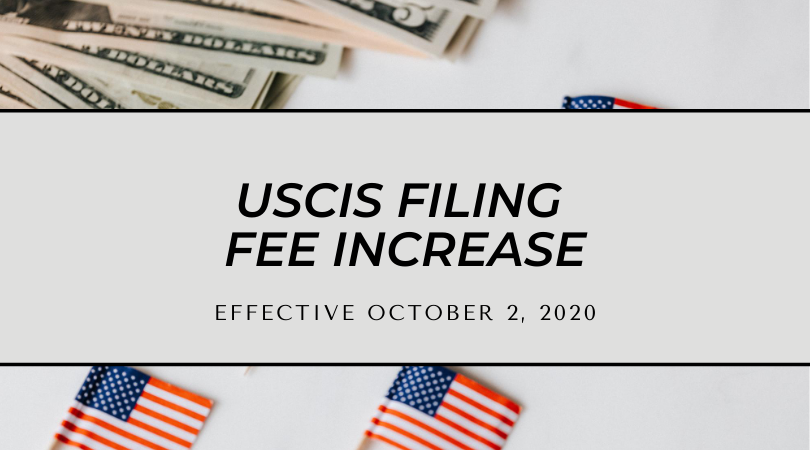 On October 2, 2020, The Department of Homeland Security (“DHS”)  will not only increase filing fees but will also change the fee structure of many applications processed by the United States Citizenship and Immigration Services. The Updated Fee Schedule was published in the Federal Register on August 3, 2020, and is intended to provide USCIS with the financial resources to adequately serve the public. Some of the most drastic changes will affect the most widely used forms.

Another notable difference is the elimination of certain application fees being waived when filed concurrently. Currently, when filing for Adjustment of Status (“Green Card Application”), the fees for the Employment Authorization Document (“Work Permit”) and Advance Parole (“Travel Document”) are included in the $1,225 filing fee. While the overall cost of the Adjustment of Status filing fee is decreasing due to the biometric service fee eliminated, the overall cost will increase due to separate fees required for the Work Permit and Travel Document. What one previously received under the $1,225 will now cost $1,130 for the I-485, $550 for the Work Permit, and $590 for the Travel Document, for a grand total of $2,270.  This fee does not include the underlying petition upon which the application for adjustment of status is based.

For the first time ever USCIS will be charging a filing fee for the I-589, Asylum Application. This fee of $50 will be required for both affirmative asylum through the Asylum Office as well as for those applying for Asylum in Immigration Court. The previous arrangement of the Initial Work Permit being free has also been eliminated, as it will now cost $550, with an additional $30 biometric fee for even the initial work permit after one has filed for asylum.

Here are some of the fee changes for the most common applications:

If you have been waiting to file an application and needed some motivation to do so, now (before October 2, 2020)  is the time.

Wilner & O’Reilly is a multi-state law firm exclusively dedicated to the practice of immigration law. We understand the complexities of immigration law and have a team of experienced professionals who are here to help. We also offer free consultations and have offices in Orange, Riverside, San Diego, Fresno, Sacramento, and San Francisco, California; Salt Lake City and Orem, Utah; and Boise, Idaho.