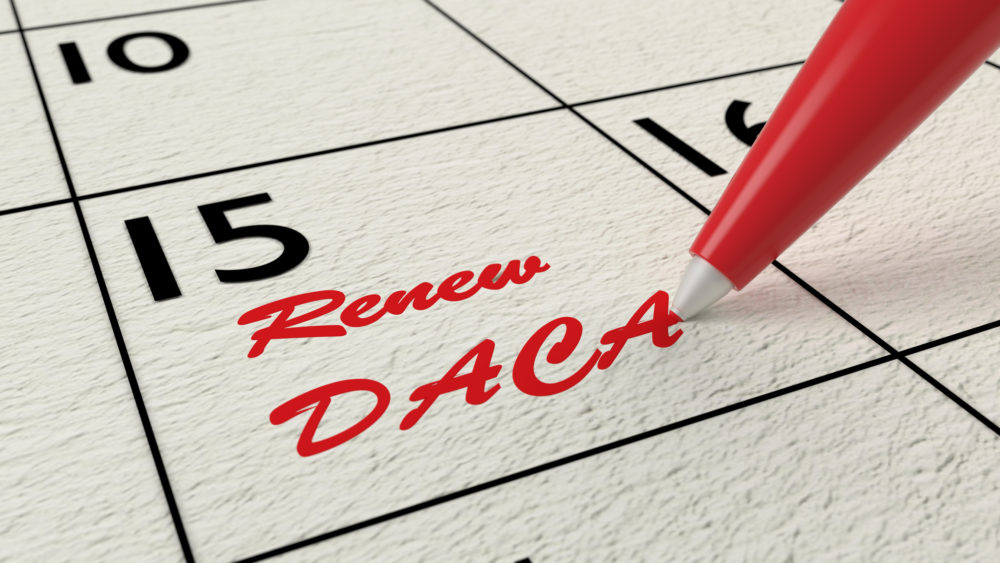 There is an immediate opportunity for DACA recipients to renew their status due to a recent court ruling. Starting today, anyone who has been approved for DACA before will be allowed to file a renewal application. This is extremely urgent and an amazing opportunity for the thousands who believed there was nothing left to be done after the announcement last September. Anyone whose DACA will expire this year should contact us immediately and take advantage of the opportunity because it is unknown how long this will remain open.

Last September USCIS announced that the Deferred Action for Childhood Arrivals program would be coming to an end. The announcement outlined procedures for certain DACA recipients to obtain one last renewal. However, a recent federal court order has reinstated the DACA program for the present time, allowing people to renew their DACA if they were unable to do so last fall.

The Department of Homeland Security decided in September 2017 that it would end the Deferred Action for Childhood Arrivals program. At the time they granted a one month period for current DACA recipients to renew their work permits, but only for those whose DACA expired prior to March 5, 2018. If their work permit expired after March 5, 2018, they were not permitted to file a renewal during the one month window and their DACA would simply expire on the date listed on the approval notice.

However, DHS and U.S. Citizenship & Immigration Services announced a change this weekend pursuant to the federal court’s decision. As of today, anyone who did not qualify to renew their DACA because it expired after March 5, 2018 can file a renewal application. This applies only to those who are renewing, not for new DACA applicants.

Any DACA recipients who could not qualify for the renewal process outlined last September should take advantage of the announcement and apply as soon as possible. DACA is sure to undergo more changes in the coming months as the appellate process begins and federal judges review the recent decision. We strongly encourage anyone who was unable to renew previously and whose DACA is expiring in 2018 to take advantage and come see us immediately so that we can begin the application process.

Kelly O’Reilly is a founding partner with Wilner & O’Reilly, APLC, and  a former Immigration Officer with Citizenship and Immigration Services in Los Angeles and Orange County. With over 18 years working as an immigration attorney, he is an expert in all facets of Immigration Law and one of the best immigration attorneys serving Orange County and Riverside County. A native of Fresno, California, Mr. O’Reilly received his law degree from the University of La Verne, College of Law and his Bachelor of Science degree from Brigham Young University. A former missionary in Hong Kong, Mr. O’Reilly has a great love of Chinese culture and is conversant in Cantonese.