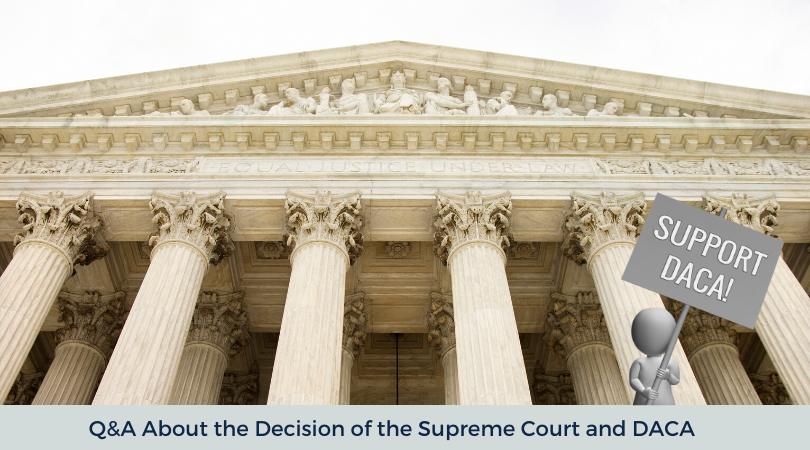 Q&A About the Decision of the Supreme Court and DACA

1.- What is the decision that the Supreme Court recently issued regarding DACA on June 18, 2020?

At the discretion of the Supreme Court, the decision to end DACA was contrary to the Administrative Procedures Act and should not be applied. The Court agrees with other federal judges that the administration did not “adequately explain why it considers the program to be illegal.” Therefore, DACA becomes completely legal again.

2.- What does it mean that the Supreme Court has “rescinded” the cancellation of DACA?

A “termination” means that a previous order or ruling is void and the law that was affected returns to its original state. In the case of DACA, this means that the program is restored to how it originally existed in 2012. People who have never previously applied for DACA, but who meet the requirements, may apply for the protection of that program.

3.- What is the protection offered by DACA?

A successful DACA application results in the issuance of a work permit, renewable every two years, which also allows the recipient to obtain a social security number and a driver’s license. In addition, you also have the option of applying for a limited travel permit (also known as an “advance parole”).

4.- So, those who had not previously applied for DACA and who qualify for DACA can now apply?

5.- What should I do if I am a DREAMer who qualifies to join DACA, but who never applied for it previously because I still did not meet all the requirements but now I qualify?

If you have met the conditions to qualify for DACA protection and wish to do so as soon as possible, we recommend that you contact Wilner & O’Reilly immediately to request a FREE consultation and thus help you confirm your eligibility and start preparing all the necessary documents.

Wilner & O’Reilly offers first consultation completely FREE and has years of experience in immigration cases. If you have questions about DACA or any other immigration matter contact us directly or visit our website at www.wilneroreilly.com/contact-us for more details or to request an appointment.