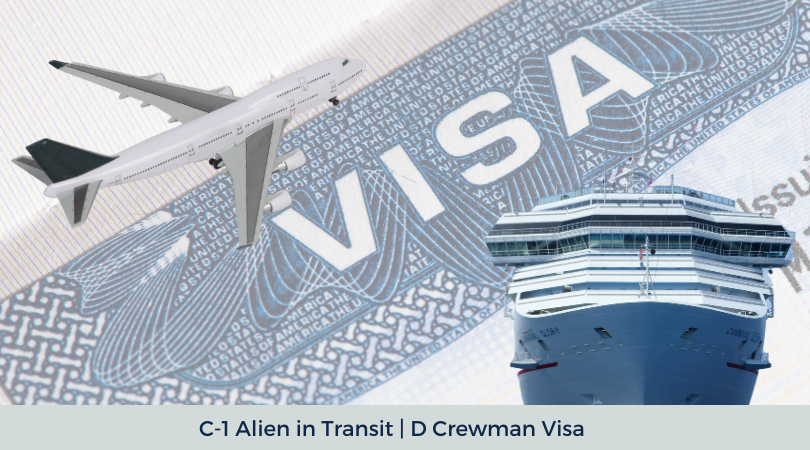 A person who entered the United States in valid visa status and was inspected, admitted or paroled and who meets other requirements may be able to adjust their status. This means they may apply for and receive permanent residency ( a “green card”) without departing the United States.  There are several exceptions to this rule, one of which pertains to those who may have entered with a C-1 or C-1/D visa.

Visas under the C-1 category may be issued to varying groups of individuals. Most often they are issued to crewmen intending to enter the United States to work on board commercial ships or international airlines in the U.S. (typically those entering as a “crewman” or with a “seaman’s book”). Generally, these people are issued a C-1/D visa. And, they are not eligible to apply for a green card through adjustment of status and will have to do so through consular processing at the U.S. Consulate in their home country.

Another group issued C-1 visas are those who are in immediate and continuous transit through the United States to a third country. Adjustment of status is available for someone in this category who upon arriving in the United States did not depart. These individuals will still have to address the issue of “preconceived intent” during the adjustment process (whether their intention was to enter the United States to obtain lawful permanent status). If USCIS determines that the person’s preconceived  intentions were to remain in the U.S. when they first entered, then as a matter of discretion, a waiver of inadmissiblity may be required and/or the case may be denied.  If denied, consular processing may remain a viable option.

There are those who fraudulently enter the United States with a C-1 or C-1/D visa under an assumed name who had no intention of working as a crewman. The argument can be made that they too can adjust status. As mentioned, crewman is defined as one entering the United States “whose intention in entering the U.S. is to pursue the calling of crewman.” Only such individuals should be treated as crewmembers under immigration law. Accordingly, those who entered fraudulently can challenge their ability to adjust status but will also need a fraud waiver in the adjustment process.

Another option for people who are crewman and otherwise ineligible to adjust is that of adjustment under 245(i). A person may be able to benefit from 245(i) if there was a petition filed on their behalf prior to April 30, 2001, or if the individual is a derivative beneficiary. Derivative beneficiaries are spouses or children (unmarried and under the age of 21) of the principal beneficiary at the time the petition was filed, or those relationships were established before April 30, 2001 while the petition was active.

We are experienced and are here to help. We offer free, in-person consultations at our offices in Orange, Fresno, Riverside, Sacramento, San Diego and San Bruno, California, as well as Orem and Salt Lake City, Utah, and Boise, Idaho.

Derek Poulsen is the managing attorney of Wilner & O’Reilly, APLC San Diego Office Location. He focuses his practice 100% on Immigration Law. He graduated from Utah State University where he earned his Bachelor of Arts degree in Sociology with a Minor in Spanish. He earned his Juris Doctor degree from Creighton University School of Law. During law school, he was selected to be on Creighton’s National Trial Team and earned the Honorable Lyle E. Strom Trial Advocacy Award. His previous practice included criminal defense, where he gained valuable knowledge of the negative immigration consequences that differing criminal activity has on an individual’s ability to remain in the United States.

Richard M. Wilner is a founding member of Wilner & O’Reilly, APLC, and is Board Certified by the State Bar of California as a Specialist in Immigration and Nationality Law. He is admitted to practice law in the State of California and before the U.S. District Courts for the Central, Northern and Southern Districts of California, the Northern District of Texas, the U.S. Court of Appeals for the Ninth Circuit and the U.S. Supreme Court.Mr. Wilner has received the coveted Martindale-Hubbell AV Rating, the highest legal and ethical rating that one can receive from one’s peers in the legal community. Similarly, he has been awarded the title of Super Lawyer from 2007 to the present. He is best known for his work in advising Fortune 500 companies, middle and small market businesses, entrepreneurs and foreign nationals of extraordinary ability in athletics, arts, and sciences in the complex area of U.S. Immigration and Nationality Law.