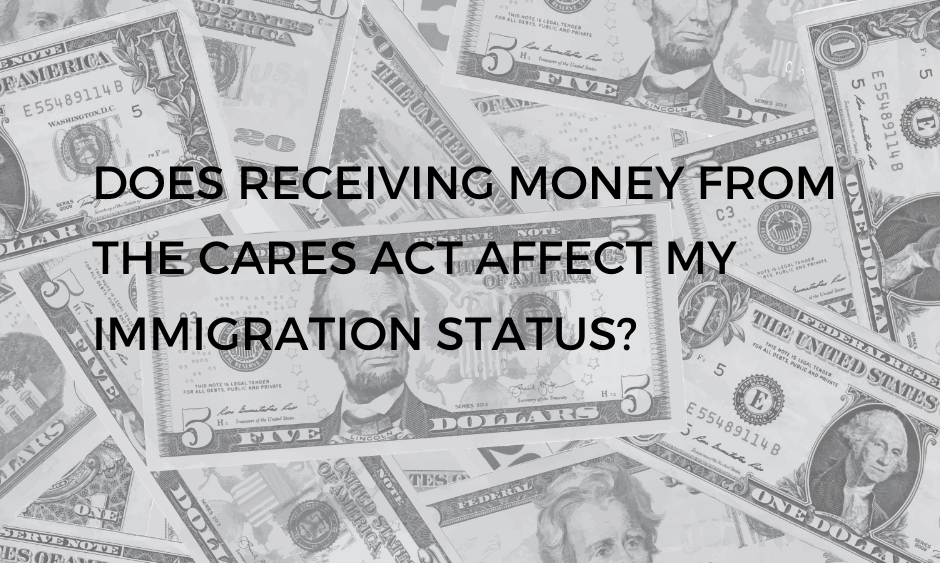 COVID-19: Does receiving money from the CARES Act affect my immigration status?

While the physical effects of COVID-19 are dangerous and prevalent, many more people are experiencing the economic effects of the pandemic. Many businesses are closed and whole industries are at a standstill. The livelihoods of so many have taken a critical hit that will have a long-lasting impact.

With economic losses so significant and widespread, the federal government is providing some relief through the Coronavirus Aid, Relief, and Economic Security Act, or the “CARES Act” for short. President Trump signed the bill into law on March 27. The law will put $2 trillion into the economy in various forms. These forms of relief include extended unemployment insurance, relief to small businesses, and $100 billion to hospitals.

Some of this money will go directly to taxpayers—$1,200 to an individual, $2,400 to a married couple, plus $500 for each child. Taxpayers born outside the United States are wondering: “Do I qualify? Will any of this money be going to me?”

In the CARES Act, a “nonresident alien” is not eligible for the payout. Nonresident aliens would most likely be those with B-1 or B-2 visas, or some of those who are here with student visas. But resident aliens and U.S. citizens are eligible, as long as they have valid Social Security numbers.

After you know whether that money is coming, the next question might be: “If I accept this payment from the CARES Act, will it make me a public charge?” The short answer is: no. The U.S. Citizenship and Immigration Services (“USCIS”) recently changed its definition of public charge, which adds new complexity to the adjustment process. We have already written a few posts on the subject.

Even under the new rules, USCIS has only a short list of public benefits that automatically turn their recipients into public charges. While cash is one of those benefits on the list, the cash from the CARES Act is not on the list. The CARES Act payments are not considered cash or supplementary income, because they are technically a tax credit or a rebate. This means that, by accepting a check from the CARES Act, you are not accepting a cash benefit and you do not hurt your chances for adjustment of status or naturalization.

USCIS looks at other received benefits, even those not on its list, when it decides to approve or deny an application. But, because of COVID-19, some of the strict measures will be relaxed. USCIS announced

if the alien is prevented from working or attending school, and must rely on public benefits for the duration of the COVID-19 outbreak and recovery phase, the alien can provide an explanation and relevant supporting documentation. To the extent relevant and credible, USCIS will take all such evidence into consideration in the totality of the alien’s circumstances.

If you depend on the government for financial help or other benefits, but that dependence is because of the COVID-19 pandemic, your case is not lost and you can still qualify to adjust status. You can read more about that here.

Even during this interesting and difficult time, Wilner & O’Reilly is still open and working hard for you to achieve your immigration goals. We offer free consultations over the phone at our offices in Orange, Riverside, Pasadena, Fresno, Sacramento, and San Bruno, California; Salt Lake City and Orem, Utah; and Boise, Idaho.