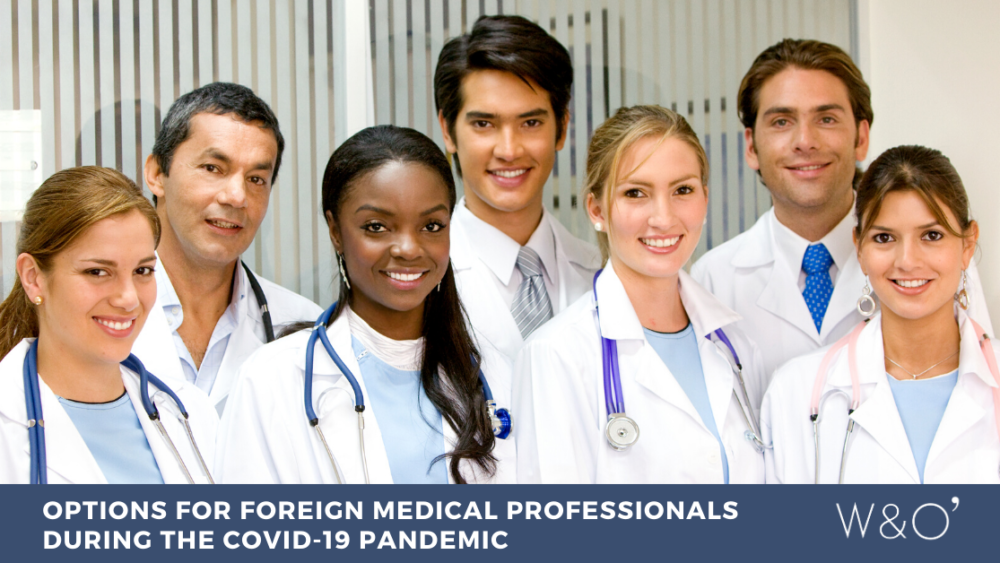 OPTIONS FOR FOREIGN MEDICAL PROFESSIONALS DURING THE COVID-19 PANDEMIC

As COVID-19 coronavirus spreads in America, our country may soon be on the verge of not having enough health workers to bravely fight this pandemic.  The ever growing number of confirmed COVID-19 cases in the United States has put a tremendous strain on doctors and nurses, not only on their health, but also supplies.

Until a few days ago, the status of over 4,000 foreign doctors who were slated to come to the United States to pursue medical residencies was in flux, as the Department of State put a stop on issuing visas.  These visas would have enabled qualified medical professionals to enter the United States to work. It goes without saying that their presence and assistance would have been crucial and essential in efforts to treat and curb the coronavirus pandemic.

The Education Commission for Foreign Medical Graduates (ECFMG) is an organization who facilitates getting visas for foreign medical graduates who apply to do their residencies in the U.S.  This organization ensures that only qualified and credentialed individuals are considered for visas. The president and CEO of the ECFMG, William Pinsky, went on the record recently and cautioned that it would not be easy to replace over 4,000 foreign medical school graduates if they could not come to the United States to do their residency programs.  He further stated that his organization petitioned the Department of State for some allowances and exemptions to permit for foreign doctors to come to the United States during this unprecedented and difficult situation but received no response.

Fortunately, the Department of State did act in response.  And the response was positive. On March 26, 2020, the Department of State posted an update for H and J visas for medical professionals.  Specifically, the government urged medical professionals abroad to contact their nearest embassy or consulate and request a visa appointment.  In the same vein, for those medical professionals who are already in the United States there may be options to get extensions in their programs or seek changes of status so they are able to legally work in the United States and provide a greatly needed service to this country.

If you have any questions about possible immigration options available to you, whether you are a medical professional or not, please do not hesitate to contact us.  At Wilner and O’Reilly, we practice immigration law exclusively. We have offices in Orange, Fresno, Riverside, San Diego, Sacramento, San Bruno, California, as well as Salt Lake City and Orem, Utah, and Boise, Idaho. We offer a free first consultation at any of our offices.   We will be happy to help you with your immigration situation.